News of Alibaba’s cloud investment and a recent software park tour indicate that China’s IT services industry is evolving in its own way.

Alibaba Invades Silicon Valley
The “Amazon of China” is following Amazon’s playbook yet again with their investment in the cloud. Aliyun, Alibaba’s technology arm, already operates five Chinese data centers supporting 1.4 million customers. They cite high performance specs, such as the ability to process 80,000 orders per second during peak shopping season, and a successful defense against the largest recorded DDoS attack in China, which lasted 14 hours with a peak onslaught of 453.8 gigabytes per second.
Even with this performance, competing on Amazon’s home turf will be no small task. Aliyun will initially pursue the growing number of US-bound Chinese companies. “We know well what Chinese clients need,” explains Sicheng Yu, Aliyun’s head of international; “now it’s time for us to learn what U.S. clients need.”

A Recent IT Industry Tour in Beijing
Nope, China is still not “the next India.”
In spite of the hype that surfaces every few years, China is not becoming “the next India.” India’s unique path cannot be replicated. Yet, a recent tour of Beijing’s Zhongguancun Software Park, where many new large buildings are bustling with bright-eyed, Starbucks-fuled youth, reveals that something is going on in China. 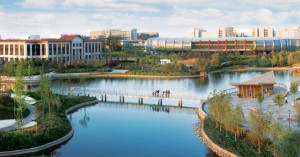 A few buildings housed familiar foreign brands (Oracle, IBM and Tata are there), though many belong to large Chinese IT service providers such as Neusoft, Pactera, and Beyondsoft.

If China is not the next India, what are all of these young workers doing?

While Chinese IT service providers cannot yet compete with the largest one-stop global IT shops, for an increasing range of geographies, industries, and service categories, they are providing unique value.